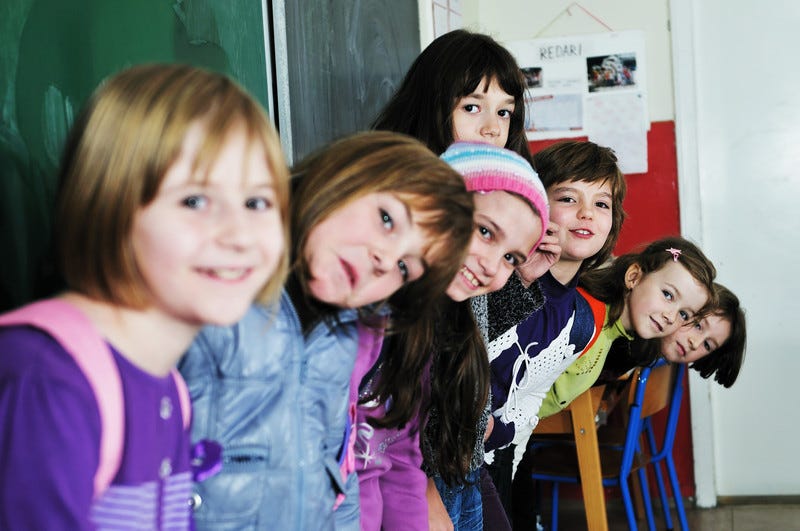 Schools in the United States may find themselves having garage sales to unload millions of traditional school desks if one California elementary school is any indication of a coming trend. In San Rafael, the majority of students at Vallecito Elementary School spend their learning day standing up, all day long, at standing desks. Nineteen of the school's 22 classrooms are equipped with the new desks, and the remaining few rooms will be transitioned shortly.

Standing instead of sitting is a trend that has been moving through the adult workforce for a while now. Even the White House wants $700,000 to equip its staff with modern desks that will keep folks on their feet. It only seems reasonable, then, that the nation's children would be next in line to experiment with the newest craze in desks.

Not surprisingly, the child version comes equipped with a free-hanging, swinging bar that allows youngsters to put one foot on the bar and rock it back and forth. Aptly named a Fidget Bar, the movable device gives youthful users a place to funnel their energy rather than being confined to a stationary desk where they might find themselves wiggling during class. Admittedly, it took a while for teachers to adjust to all the added movement taking place in classrooms.

Stools are available for students to use, but teachers are reporting that the children rarely use them. When the desks were first introduced at the elementary school, the youngsters did get tired standing up all day. Within a few months, though, the students became more productive, focused and confident, according to the school's principal. These results seem to line up with studies that have shown an increase in grades by as much as 15% for children who are allowed to move during the day.

Another huge benefit of moving in class is the additional amount of calories it helps kids burn, as much as 25 percent more than sitting all day at school. Dr. Steven Mittelman of Children's Hospital Los Angeles agrees that the benefits of physical movement are immediate. He is the director of the hospital's Diabetes & Obesity Program who reports that improved arterial function and circulation, increased muscle tone in legs, and the extra calories burned every hour can lead to major positive changes in a student's health.

The cost of fitting a single classroom with standing desks can run as high as $6,000. This high price tag is leading other schools to look for alternative ways to keep students active during the school day. Some are having youngsters sit on yoga balls at their desks to help increase core stability. Still other schools are putting students on exercise bikes with a book in their hands.

An organization called “StandUpKids” was started with individual and corporate donors to raise $1 million to enable teachers to apply for grants to convert their classrooms. The founder additionally hopes the federal government will grab onto the idea so new schools being built will automatically come with standing desks only.
Back to Blogs
Categories
Recent Posts
Blog Tags
800-872-0560