The Benefits of Anti-Fatigue Mats in the Workplace 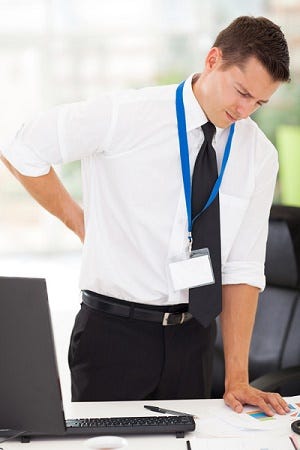 Any worker that stands for more than four hours in a single shift are likely to suffer from fatigue which could result in back and neck pain as well as increased discomfort or pain in the joints, such as the ankles, knees and hips. As a massage therapist, we’re all used to being on our feet for multiple hours in a single shift, but most of us don’t realize the type of damage we’re doing to our body in the process.

While most of us can’t change the amount of hours we work in a day, we can decrease the negative effects these shifts have on our body with small changes to the environment in which we do our work. One of these changes, the anti-fatigue mat - is cost-effective and proven to help decrease the amount of strain on our joints as well as the back and neck while standing for multiple hours.

These mats have been studied extensively, and one of these studies – conducted by Redha Taiar – presented findings on reducing fatigue in the workplace for those that are standing on hard surfaces for a good portion of the day. The findings of Taiar’s study showed that the crucial benefit of anti-fatigue mats cam in changing the symmetry of the way we stand as well as how our balance works with and without these support aids. For example, we might surmise that the position of our feet while standing doesn’t make much of a difference. Whether our feet are together or apart, we’re still receiving the same amount of pressure on our joints, such as the ankles, knees and hips.

In reality, balance is everything while standing, and the findings of Taiar’s study showed that typically those who stand for a great deal of time utilize as much as a 70/30 split when talking about distributing weight equally across two sides. This leads to increased pressure on the back and spine as well as the aforementioned joint pains due to a dysfunction in our overall balance. Rather than balancing on two legs, we’re shifting weight back and forth between the two without ever really maintaining a 50/50 balance.

This imbalance is the cause of most of our problems while standing. However, those standing on an anti-fatigue mat - which is typically just a foam or rubber mat that adds additional padding to a harder floor surface - were shown to have a restored overall balance and even that 50/50 split that is ideal for reduced fatigue and joint pain.

When a worker is able to maintain this balance it leads to increased energy levels as well as reduced pain and weakness in the legs, as well as the lower back and the neck. The findings conclusively prove that subtle changes to standing behavior can change the overall health of the worker. As such, anti-fatigue mats make a great addition to any workplace, especially those that find workers standing for a greater portion of their day – like massage therapists.

Making the changes to the overall standing behavior are often quite difficult for adults, who have – through both habit and conditioning (shifting weight to one side helps to alleviate fatigue and pain on one side) – proven unable to maintain this sort of change over the long haul. As such, the addition of these mats as a way to change behavior in a sort of sub-conscious manner amongst massage professionals could just be the key to extending your career, as well as maintaining energy levels and alleviating joint pain.
Back to Blogs
Categories
Recent Posts
Blog Tags
800-872-0560